In the extrusion process, lengthy components of constant cross-section are made by squeezing a lubricated powder mix from a container vessel through a shaped die.

Powder is hydraulic or by worm drive, the press often being operated at an angle in order to aid placement of the extrusions on a grooved graphite slab. Extrusions normally remain on the slab until after the sintering - or, now more frequently, the sinter-HIP-cycle is completed, the grooves helping to maintain straightness in extruded sections.
Extrusion normally requires a greater amount of and/or a sticker lubricant than is used in conventional pressing .This lubricant may be a wax, organic solid, petroleum jelly or liquid lubricant, such as a polyethylene glycol, without additional solvent. Because of the special nature and comparatively small volumes of lubricated powder required, dedicated mixers, blenders and mills are preferred for the purpose.

The process is still something of an art, thin as-extruded components being extremely fragile, held together only by the lubricant. For many years, manufacturers often supplied tungsten carbide extrusions are random lengths, but the technology is now well-established and good quality extrusion are mass-produced as routine. Considerable know -how and expertise has been amassed by the leading companies in this field, and by their experienced operators.

Important to the economic success of modern extruded parts is the use of sinter-HIP furnaces, producing a consistently high-grade structure with minimal porosity in a single sintering cycle.

This is versatile production method, capable of reducing cost significantly in the right application, or of producing tungsten carbide shapes and sizes that would otherwise be impossible. Examples include solid tungsten carbide blanks of circular cross-section for drills, end mills and similar tools, including those with single or multiple intergral coolant holes, flats or knives and wood-planers, and special sections for gun-drills and razor-blade stampers.

An elegant and patented method of extruding rounds with internal-and variable-helically twisted holes has been developed by Konrad Friedrichs of Kulmbach, Germany.

The operation has three important features: the design of the die nozzle for the worm extruder; rotation of the die and hence the extruded rod-perhaps more accurately described as multi-hole thick-wall tube-as it emerges from the die, by a variable-speed bicycle-chain drive; and a simple but very efficient monitoring device to control the helix angle. The same die and nozzle set-up can be used to produce almost any helix angle, at relatively low cost, the ratio of extrusion speed to rotational speed determining the pitch of the helix.

The extrusion die is designed to leave a slight mark,0.05 deep, on the surface of the newly extruded rod or tube ,which follows the internal helix. A video camera displays the mark's position as a 'pip' on a crt monitor with a plastic overlay. After presetting, for precise control of the helix angle, the operator need only ensure that the pip is maintained between two vertical lines. If reguired, the helix angle can be changed within the same bar in mid-extrusion.

Another example of extrusion versatility is the very large-scale manufacture of carbide print-wire stock for dot-matrix printers, around 300mm long but only 0.3mm in diameter as extruded, about 0.2mm after sintering. Quality is critical, because a multi-step form is ground on the end of each tiny print needle, numbers of which are made from each extruded length.

Extrusion carbide print-wires is understood to have originated in the United States, though most production seems now to be centred in Japan. The operation tends to be carried on behind locked doors, and little detail has been published on manufacturing processes.

Because of this secretive development, plant designers tend to differ more than with any other kind of hard metal-making apparatus. For example, a mech-anically complex extrusion machine installed at Tokyo Tungsten exploys a fixed extrusion head and rotating cross-shaped carrier arm, which picks up each extrued length, then transfers it to a second robot head, which in turn places is gently on a carbide slab, ready for sintering. Print needles are offered in seven different high-cobalt(high-strength) grades, with hardness from 1020 to 1200HV,densities from12.5~13.7 and very high transverse rupture strengths, from 4000 to 4400N/mm2.

By contrast , a Toshiba Tungaloy plant with the same end-product is of oval 'race-track' or 'merry-go-round' design, with a vertically operated extrusion head able to track at right angles across an 'endless' series of graphite slabs as they pass beneath. Each slab has a number of longitudina V-grooves to hold the extruded wires, the short lengths of extrusion between the slabs falling away under their own weight. After each rotation, the extrusion head tracks across to the next groove of each slab and the circuit repeated. When each groove is full, the set of slabs is taken for sintering and replaced by a new seat. About 480 lengths are produced is each run. 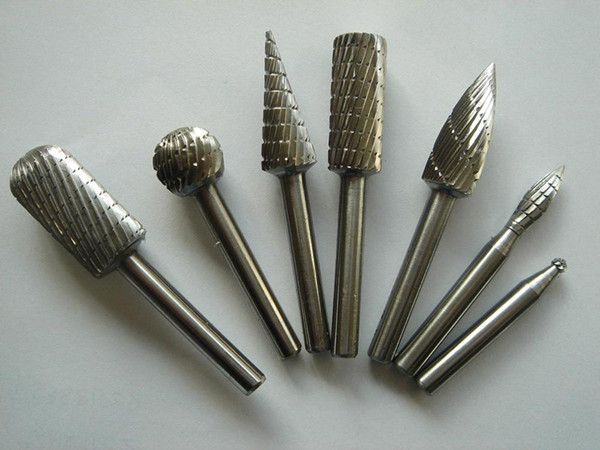